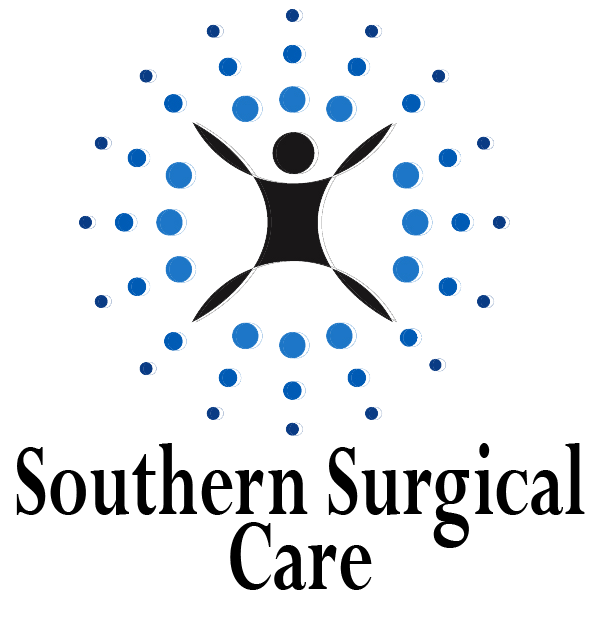 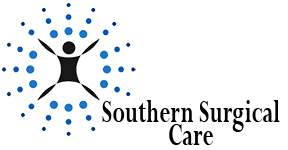 Reflux disease or gastro-oesophageal reflux disease (GORD) is a common problem for many people. It can be quite bothersome and sometimes cause preventable complications. Many people feel just fine after using a small amount of medicine and never need to see a surgeon, but there are some who should come for a discussion to see how we can make things better. 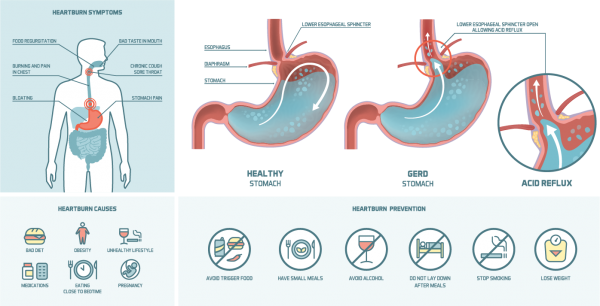 The problem with GORD

Reflux disease affects around 40% of adults. Symptoms can range from mild (an occasional ache that can be annoying) through to debilitating (daily bothersome problems despite medicine causing many problems). It is a frequent reason for people seeing a doctor with 2% of GP consults related to GORD and usually these patients need to come back multiple times.

GORD can lead to some serious health problems. Refluxant onto the lower gullet causes irritation and erosions that can bleed (causing anaemia), scar down (preventing swallow) and even perforate (becoming a surgical emergency). Over many years, this irritation can cause changes in the cell type,
becoming something called Barretts Oesophagus… sometimes leading on to oesophageal cancer. Reflux into the throat can also cause problems with the teeth, vocal cords and airways. Many people suffer severe lung infections through reflux and the occasional unlucky few can even scar down the airway.

Many of these patients become dependent on an acid lowering medication called Proton Pump Inhibitors. When this is used for many years it can become costly and has recently been shown to have some concerning problems. These include kidney dysfunction, brittle bones, imbalance in the gut microbiome and possibly an increase in a type of stomach cancer.

For these reasons, surgery can be considered for many patients who suffer from reflux disease!

NOTE: HIATUS HERNIA OFTEN MAKES REFLUX WORSE BUT IT IS NOT THE SAME THING. 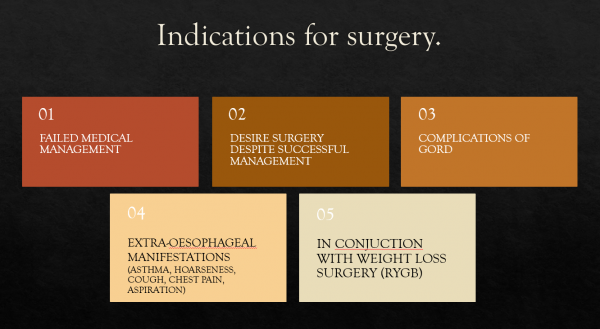 The modern surgical approach to reflux disease is usually with a procedure called a fundoplication. In most cases it is using keyhole and needs 2 to 3 nights in hospital. Modified diet is recommended for around six weeks with step up every 2 weeks from fluids to pureed food and finally a soft diet. Pain is usually not a big problem and most people return to their usual duties after two weeks.

The steps of the procedure: 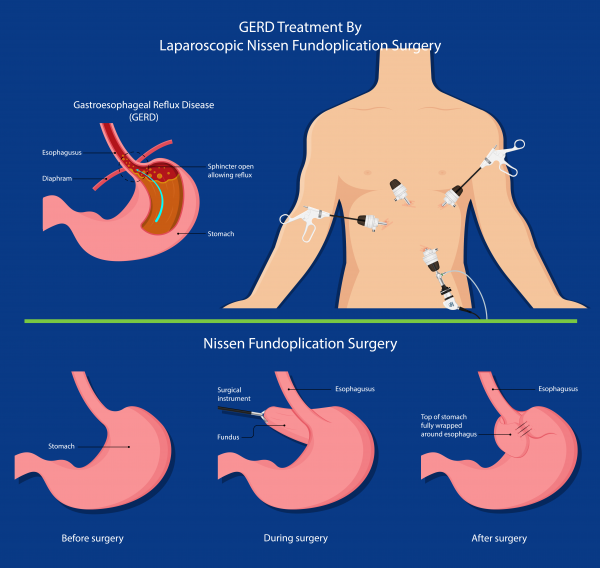 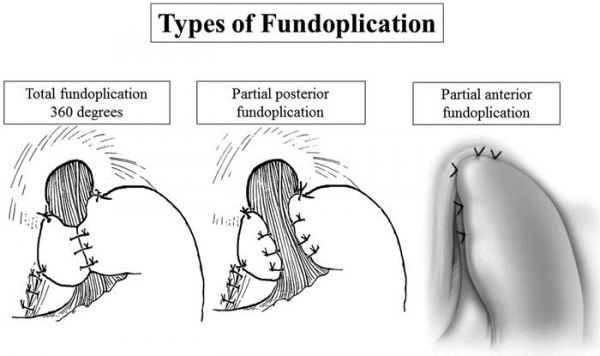 What to do if things aren’t right afterwards

Everyone is recommended to continue acid lowering medications for a month after the operation. If you don’t feel right after around a month, we will work through what’s happening to figure it out. Often bloating and slow swallow are reported as a recurrence of reflux when in fact it’s the expected effect. In other cases a gastroscope is needed to stretch the area and get everything working again.

The most important thing is to talk to your surgeon about what you are not happy with so we can work it out. Most things can be fixed simply and we want to make sure you have a good outcome now and into the future. 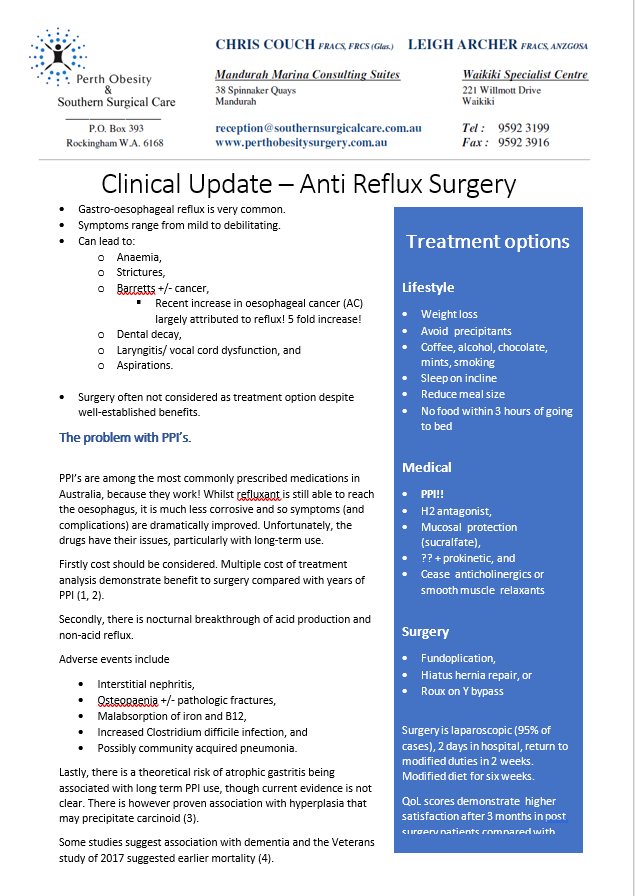 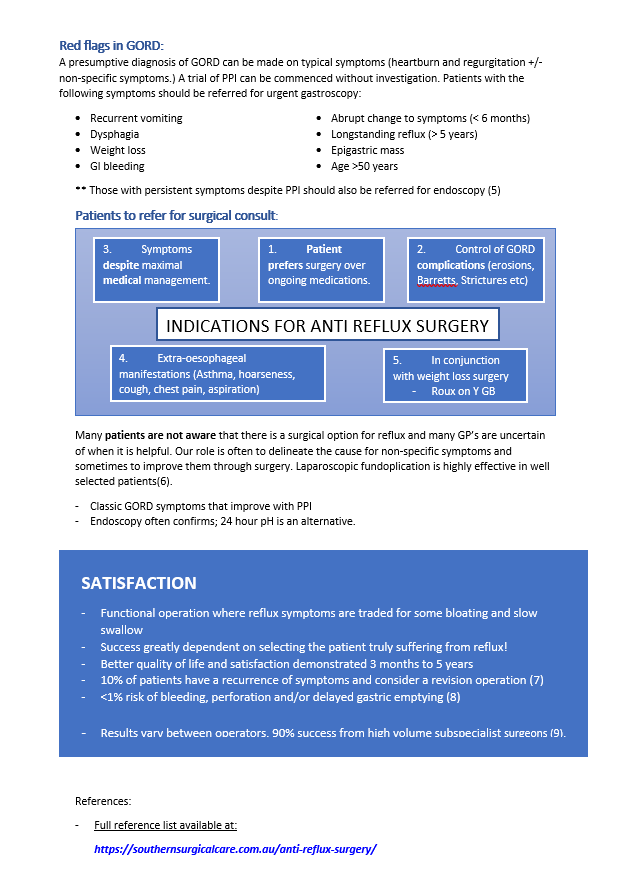